Lives matter more than numbers … but numbers are important

Lives matter more than numbers … but numbers are important 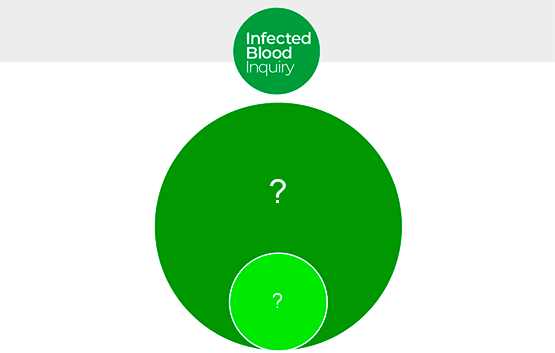 Media reports oftentimes repeat parrot-fashion what others have said or what has been said before, without necessarily getting the detail or context right.

“About 7,500 people, of whom roughly two-thirds were haemophiliacs, are now known to have been given hepatitis C during this period.” (Daily Mail)

“An estimated 7,500 patients, many of whom had the blood clotting disorder haemophilia, contracted hepatitis or HIV as a result.” (Daily Mail)

“About 7,500 people, many with an inherited bleeding disorder called haemophilia, were given blood products infected with hepatitis C and HIV in the 1970s and 80s.” (BBC)

So do they provide the full scale of the disaster?

Context is important in all aspects of this. The numbers often quoted in the media are related to haemophiliacs and those with other bleeding disorders and this is understandable because more historic records have been sourced to equate to these estimated figures than for transfusion cases. In addition the haemophiliac community throughout the UK have coalesced around their shared condition and experiences to become a visible campaigning group (or groups).

Transfusion records across the UK are less complete and reliable, such that the Department of Health had to apply statistical procedures to arrive at estimates for the numbers of people infected through transfusions.

in 2003, the Department of Health estimated the number of people who received contaminated blood and blood products in the UK as nearly 33,000.

Now, there is more to the numbers than these headline/banner figures, but they do serve to get your attention and they do provide a better context than the popularly repeated numbers.

After SIBF representatives met Sir Brian Langstaff and his Inquiry team recently we sent an information sheet containing these statistics to the Deputy Inquiry Secretary as we had brought this up in our discussions and felt it was important that the transfusion side of the community, who are the majority still living by weight of numbers infected, are given a voice which is sometimes not so loudly expressed in the media. That is due to haemophiliac campaigners and campaigning groups, and all power to them and we support them. But we do not wish to promulgate any narrative that attempts to promote one side of the community, potentially at the expense of another. As we have heard so often from many of our members, everyone was infected, no matter what the transmission route.

The data derived from the Department of Health estimates (from 2003) can be illustrated below:

The 4,675 estimated to be infected from blood products represents 14% of the overall estimate of 32,718. Transfusions represents around 86% of the total infected. The weight of estimated transfusion cases outstrips known blood product cases by a factor of 6 (represented by the stacked Venn diagram to the right).

It is presumed the Langstaff Inquiry will calculate, collate and provide updated statistics as part of its work, although Terms of Reference have not been finalised or publicised at the time of writing this article. 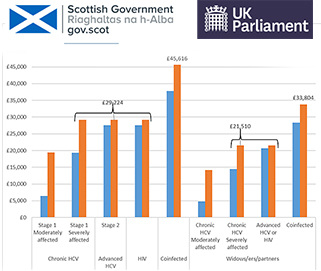